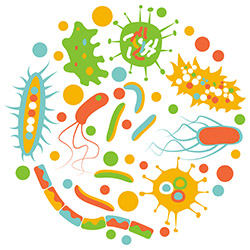 As some of you know, my second favorite health topic after testosterone is gut health. I’m happy to finally tackle some of the effects that probiotics have on hormonal health, and especially the interaction between Lactobacillus reuteri and testosterone.

For many years, I have spoken and written about beneficial gut bacteria and the importance of intestinal health. Yet, I was still surprised when I saw some of the preliminary studies on probiotics and testosterone.

Really, it shouldn’t maybe have been that big of a surprise, because we already know how important the gut microbiome is to almost all aspects of our health.

The digestive tract is really quite an astonishing machine. We can stuff our mouths with anything that even remotely resembles food, and our guts are able to deal with it.

The food is first broken down in the stomach and any unwanted microbes and pathogens are neutralized in the acidic environment.

At the same time, many organs around the digestive tract have kicked into high gear. The pancreas and stomach produce digestive enzymes that further break down carbs, protein, and fats. The liver produces bile, which the gallbladder then releases to help with the digestion of fats.

In the 20-feet-long small intestine, the food matter is further broken down before the nutrients are absorbed into the bloodstream.

The digestion process would be impossible without bacteria such as Lactobacillus reuteri, which reside in the small and large intestine. To put it simply: we would die without our intestinal bacteria.

The absorption of nutrients is not the only job which our guts carry out. More than 75 % of our immune system lies in our intestinal tract, and there are more than 100 million neurons in our guts, nerve cells, which are normally perceived as brain cells.

What it all boils down to is that the health of our gut will affect all aspects of human health. The link between probiotics and testosterone has, thus far, only been examined in animal studies. However, the results of these studies are very interesting.

Cortisol, commonly known as the stress hormone, is a steroid hormone produced in the adrenal glands. Together with other hormones such as adrenaline, it plays a part in the fight-or-flight response.

An acute cortisol response can be useful and even life-saving in sudden situations where the body needs to be alert or the immune system needs to be activated. However, chronically elevated cortisol levels lead to many negative health effects.

Chronic stress and high cortisol levels are very bad for us dudes. Not only does cortisol cause a reduction in testosterone levels in men, it is also a catabolic hormone that breaks down muscle mass and leads to reduced libido in prolonged stress. (1) (2) (3) 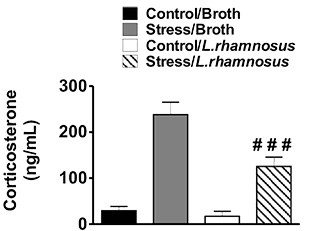 The reduction of cortisol with L. rhamnosus can be seen on the right side of the chart above. If the probiotic has a similar effect in humans, it would be very compelling, as testosterone levels tend to go up as cortisol goes down.

Lactobacillus reuteri is a bacteria species that is found almost universally throughout the animal kingdom. It is also among the first bacterial species that are naturally established in the microbiota of new-borns.

Let’s jump into the MIT study from 2014 – a study that raised eyebrows and left many with dropped jaws. In this extensive rodent study, the researchers mixed a Lactobacillus reuteri ATCC 6475 strain into the drinking water of aging rats. (5)

Yes, Lactobacillus reuteri both inhibited the age-related shrinking of testicles for the mice, which happens in humans too, and actually made the mice balls grow in size. 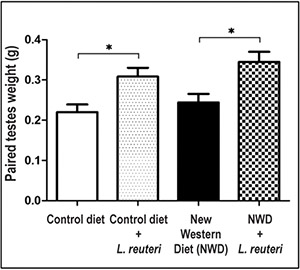 The dominant behavior of the probiotic-fed rats and significantly higher testosterone levels prevailed even when the researchers tried multiple different diets for the rodents.

Luteinizing hormone (LH) and follicle-stimulating hormone (FSH) are produced by the adrenal gland in the brain. As mentioned above L. reuteri intake increased the levels of both of these hormones. LH controls testosterone production in the testicles and FSH is responsible for regulating sperm production.

So, in this animal study, Lactobacillus reuteri presented as a real jackpot of male health. Hopefully, further human studies are conducted to investigate this and other probiotic strains.

The researchers stated that, given the controversy and risks of testosterone replacement therapy, dietary L. reuteri may provide a natural approach to the prevention of age-related low testosterone levels.

Other Health Effects from Lactobacillus Reuteri

In a Canadian double-blind study, 127 healthy adults were given Lactobacillus reuteri for 13 weeks. The daily probiotic supplementation boosted vitamin D blood levels by 25 % when compared to the placebo. (6)

This is significant given that higher vitamin D levels are associated with increased testosterone production in men. (7)

Of course, probiotics often promote gut health too. Human studies have shown that Lactobacillus reuteri can help with constipation, reduce diarrhea incidence, and decrease inflammation in the intestines. (8) (9) (10)

In addition, Lactobacillus reuteri has antimicrobial properties, killing unwanted bacteria, yeast, and parasites without killing beneficial gut bacteria in the way that medical antibiotics do. (11) (12) (13)

Various other health benefits have been observed with L. reuteri intake, such as improved thyroid health, better vitamin B12 status, and reduced systemic inflammation. (14) (15) (16)

The L. Reuteri Probiotics I Recommend 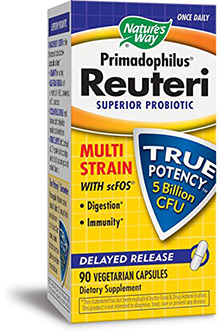 The precise strain that raised testosterone in the MIT rat study was Lactobacillus reuteri ATCC 6475. Other reuteri strains may or may not have the same effect; it is impossible to say for sure before further studies are carried out.

ATCC 6475 is not the most common strain in probiotic supplements, but it is available on Amazon. A Swedish probiotic manufacturer called BioGaia actually owns the patent for ATCC 6475.

While I haven’t yet tested BioGaia’s probiotics myself, I plan to do so in the near future. I have taken another L. reuteri probiotic called Primadophilus on several occasions. It contains another well documented L. reuteri strain, and also carries Lactobacillus rhamnosus which had the positive effect on cortisol levels.

Probiotics are regarded as generally safe for most people. Nevertheless, there is always a risk of adverse effects with any supplement or dietary change. People who suffer from histamine intolerance or immunosuppression may have an increased risk of harmful side effects from probiotic intake.

I have previously written about how low carbohydrate diets are bad for testosterone production. I believe that one of the reasons why higher carb intake promotes elevated testosterone levels is the fact that carb-rich foods also feed the probiotic bacteria in our guts.

Hopefully more studies will be carried out to assess whether Lactobacillus reuteri and other probiotics promote testicular health and robust testosterone levels in humans too. In the meantime, I will at least do some human experiments by taking probiotics and eating probiotic foods!

The Risks of Testosterone Replacement Therapy

Zinc: An Essential Mineral for Men